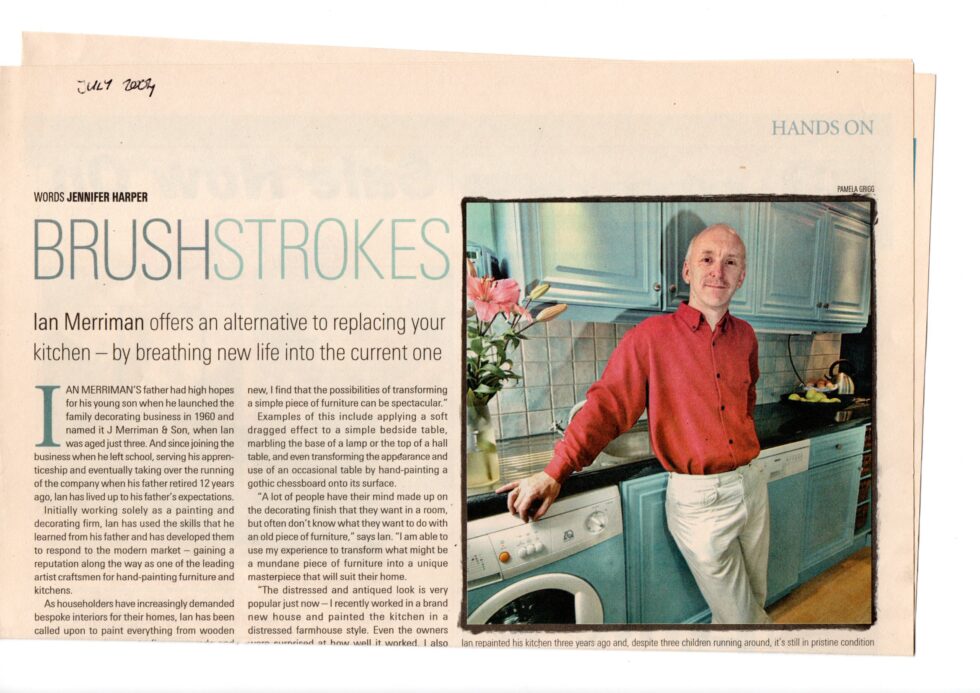 I started working with my father immediately after leaving school in 1973. He had established the decorating business in 1960. I served my 5 year apprenticeship with him, I was made a partner at the age of 18 and have been self-employed since then, we continued working together until his retirement in 1985.

I continued the business of general painting and decorating on my own, concentrating on private domestic work, I still had a few of my Dads clients and continued to build a strong data base of new clients.

I married at the age of 30 and subsequently had 3 daughters. In 1996 I suffered serious health issues which had a major impact on continuing the business, my Doctor advised that I should consider changing my job as it would prove difficult to carry on with the physical nature of it. This came as a massive blow for the future as we had 2 young daughters at the time. I lost almost a years business, I had no idea how we were going to manage. I did return to work but soon realised I couldn’t carry on doing the only job I had ever known.

I had been painting a few kitchens alongside the decorating business, the idea of hand painted kitchens was just becoming fashionable around this time, so I decided to look into finding more of this type of work as it was less physically demanding. I searched the yellow pages directory (no easy access to the internet at that time) for companies that manufactured kitchens and furniture to be professionally painted. This led to my name being handed around high end bespoke kitchen companies before long enquiries were coming in from other sources, mostly private clients looking at up grading their existing kitchens. I was fortunate to have had a conversation with a freelance journalist who wrote articles for the Scotland on Sunday home magazine, she asked if I would be interested in appearing in an article about my new business, I agreed and that really did have a major boost to the business, I still come across clients who remembered reading that article! I started advertising locally also in national magazines, before long I had sufficient full-time work.

I have carried out work as far North as The Black Isle and south as far as Buckinghamshire and on one occasion Ireland.

I have seen many changes within the decorating trade over the 50 years I’ve been involved in it, mostly in the materials used. The introduction of water based (acrylic) paints has seen a massive change in the industry. Not only the drying times compared to conventional oil-based paints but also the less impact they have on the environment and the health and safety aspect while using them. I remember trying to convince my father that we should consider using rollers rather than brushes, this was unheard of in the trade at that time, rollers were being used in the early 1950s but only on industrial work like ship building. He eventually realised the benefits of using rollers. The current trend in the decorating trade is to use spraying (even on domestic work). I am still very much of the old school in that I finish all my work by brush. Clients often ask me how I achieve such a perfect finish off the brush, my answer is that if they want to learn how to achieve the same finish just try it for 40 to 50 years.

I am not at the stage of retiring yet as I really do love the work I do and meeting some amazing people along the way. I would like to thank any of my clients reading this article for their custom over the years but mostly thanks to my amazing wife and family for the support they give me.